August is over, and it's time to sum up! Players have been incredibly active in the eighth month of the year, and every day, more and more new users choose RajBet online casino! So let's find out which slots were most often played by gamers at the best casino India!

This game is restless and keeps breaking records! More than half of rajbet.com users have played Aviator for real money at least once. Once a RajBet casino player has managed to increase the 100 INR bet by 8000 times!

The Aviator game was released to the mass market in 2019. As the Spribe developers say, they were among the first to create such a revolutionary new generation product according to advanced quality standards.

If we describe the gameplay in the simplest terms, a user will see an aircraft, a control panel, and statistics. You need to place a bet and collect the money before the plane takes off.

What can a gambler get in this original virtual entertainment? The casual excitement of making some money goes hand in hand with real opportunities to win. Yet, despite the simplicity of the Aviator game, sometimes you need to be patient to win, and especially thoughtful users even develop their strategies.

The longer the flight of the game's main hero is, the more triumphant the victory is. For example, you bet a certain amount of money and decide to withdraw it when the monitor has a coefficient of 2.00. Congratulations, the original bet doubles. However, pressing the "Cash out" button is important before the plane takes off.

To start earning money, a player must make a deposit. After that, the opportunity to bet on real money will become available. There are many ways to hit the jackpot. Use the strategies developed by experienced players, or you can just wait for the coefficients of 100 and withdraw the jackpot.

We also recommend that you follow the statistics displayed on the screen. And if you still do not know all the rules of the Aviator game, then play it first in demo mode.

2. King of the West by Blueprint Gaming

Leading software developer Blueprint Gaming can be proud of their King of the West slot, as RajBet casino players enjoyed this entertainment slot thousands of times in August 2022.

The game's name fully justifies its theme. All symbols represent the most recognizable attributes of the so-called "Wild West", a historical region in the USA that existed at the end of the 19th century.

Revolvers, cards, whiskey, bandits, carriages, and tavern name letters form 20 paylines on the King of the West slot's five reels that immerse you in an incredible atmosphere.

At the top, there is an additional reel that complements the winnings of the main combinations below, and the game is accompanied by atmospheric music created by Blueprint Gaming.

Combinations of five premium symbols can make the winning 3 to 20 times bigger than the total bet. The maximum possible win in the King of the West game can exceed the initial bet by 50.000 times, which is a pretty good jackpot.

A bullet hole represents the Wild symbol in the King of the West slot machine, which can be replaced with any other. As for the bonuses, symbols can appear on the additional horizontal reel, and they are responsible for extra free spins, shifting symbols, or collecting all the rewards on the reel. 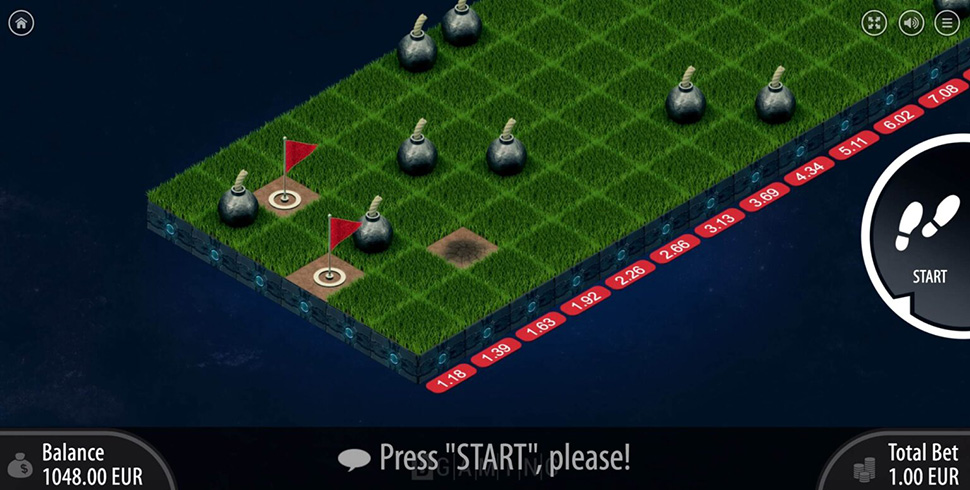 Many RajBet users decide to play without lines, cards, reels and spins in August. And for this, they chose the Minesweeper slot machine, developed by the BGaming studio.

Indeed, the process is so fascinating that it is impossible to stop playing. The guests of the rajbet.com portal try on the role of a gambling sapper and make their way through the minefield step by step.

If you want to win in the Minesweeper online slot - manoeuvre around the hidden bombs and increase your prize with every safe move.

If you have not played the Minesweeper slot yet, you will know all the minutest details after the first round. Choose the size of the bet - 1, 5, 10, 25, or 100 coins per round and the format of the playing field on which the potential win depends. You can play Minesweeper online on the following fields:

Choose a cell where, as you think, there is no bomb, and click on it. If the choice is correct, a red flag will appear in place of the square, and the bomb's location will be revealed.

If your intuition fails, the bomb explodes, and the round ends with losing the bet. At any stage, withdraw the winnings or go the whole hog.

You can enjoy the Minesweeper game on your computer and phone by downloading the official RajBet app to your gadget. Thus, you can constantly stay in the game and win more than other players. 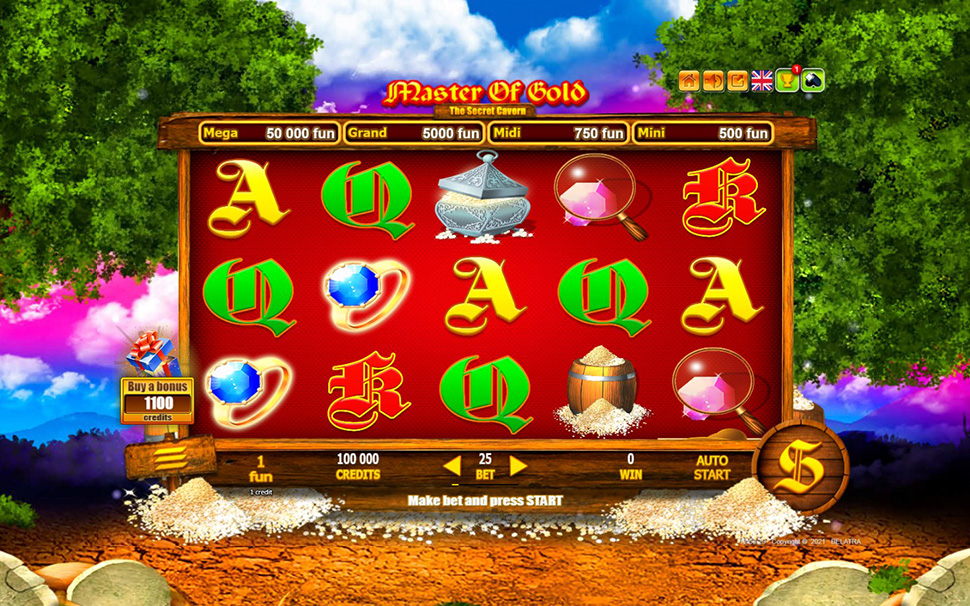 The Master Of Gold slot is extremely popular among Indian players. The game attracted the attention of a wide range of our users due to its unusual design, made in a cartoon style. However, the Master of Gold casino slot features high-quality graphics and excellent mechanics.

This Belatra Games slot consists of 5 spinning reels and 3 lines that form 25 withdrawal positions. At the same time, the Master of Gold game has high volatility, which guarantees big wins.

The rules of the Master Of Gold slot machine are elementary: in one of the forest clearings, you and a gray-haired old man must find various jewels. The win here is formed when three or more identical symbols appear on one of the prize lines from left to right. By the way, the maximum win can exceed the size of the initial bet by 500 times.

As for the special symbols in the Master of Gold casino game, the Wild replaces all the standard symbols for one of the prize combinations to drop, and the Scatter provides access to free spins with the possibility of restarting.

The presence of six or more credit symbols opens the bonus game, where you can win one of four jackpots.

Remember that to receive free spins, you must collect at least three Scatter symbols. In the beginning, you get five free spins, but if three more Scatters appear during them, the game guarantees five additional free spins.

Another nice bonus in the Master of Gold slot is the ability to buy access to free spins or re-spins without waiting for Scatter symbols. 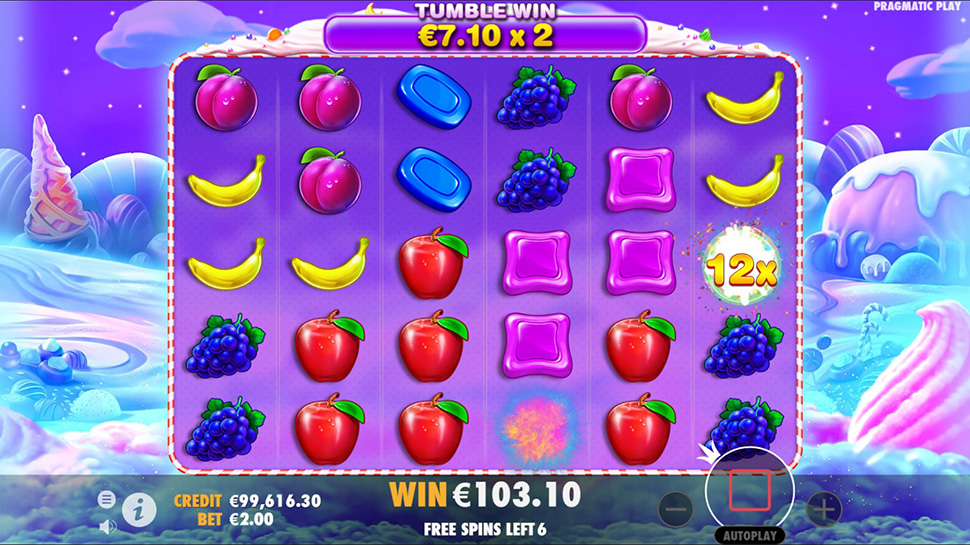 The Sweet Bonanza slot machine is a tempting slot from Pragmatic Play. This game is set on a 6x5 grid and has special features like Cluster Pays, free spins, a bonus round, and various multipliers.

Medium volatility and high RTP in the Sweet Bonanza game provide frequent withdrawals. The win potential is also impressive, with a max win that exceeds a player's bet by 21,000 times. No wonder the Sweet Bonanza slot has become one of the most popular entertainment among RajBet online casino users who enjoyed it in August.

The theme of the Sweet Bonanza slot machine is sweet candies. A user sees a beautifully designed background of Candyland where the reels spin and become full of different types of candies. There are all kinds of sweets and fruit here: apples, candy canes, lollipops, plums, and berries. The coloring of the slot matches this theme: there are many bright and vibrant colors, which give it an alluring look.

The Sweet Bonanza online game uses the All Ways Pay mechanic, aka Cluster Pays. There are no paylines, and winnings start when at least 8 identical symbols are located horizontally or vertically next to each other.

The only special symbol in the Sweet Bonanza slot is the Lollipop Scatter. By the way, there are no requirements for where the Scatters must be (that is, they must not form a specific payline).

Also, in the game, you can find a multiplier symbol: a multi-colored bomb, which appears only during the free spins round. If such a symbol drops, the player will receive a withdrawal of 2x, 5x, or 100x of the total bet and ten free spins.

The free spins work absolutely the same as in the regular game, except for multi-colored bombs with multipliers. These multipliers can be as high as 100x!

And another attractive feature of the Sweet Bonanza slot machine is the bonus game. After each spin, winning combinations are withdrawn, and all winning symbols disappear. The rest of the symbols fall down, and the empty positions are filled with new symbols that fall from above. The fall of the symbols will continue until no more new winning combinations are formed due to the fall. At the same time, the number of possible falls is not limited.

Which slots will be at the TOP of September 2022 — is up to you! After all, you, as a regular user of RajBet platfrom, directly influence the game statistics. Thanks to you, other players can discover exciting slots and immerse themselves in the atmosphere of victory.

So, the rajbet.com portal is always on your side and constantly offers various bonuses for different games from world developers. So don't forget to check the Bonuses section and explore the News section daily to increase your chances of hitting the jackpot!

Stay in the game! And remember, fortune smiles on the most persistent!